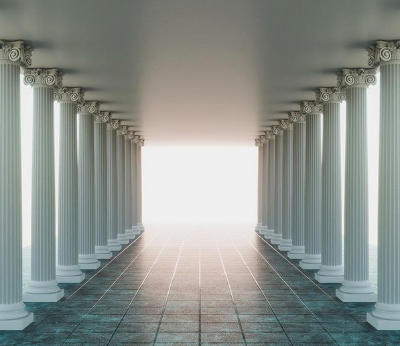 Latin maxims and legal phrases are sometimes compared to axioms in geometry. These are the established universal principles of law, usually well known to people in the legal profession. However, it must be said that these pages can in no circumstances be used as a source of legal advice, legal counseling and/or simple recommendation on any matter, including but not limited to judicial proceedings of criminal, civic, family, common law and Court TV. By choosing to read the text below you, the reader, scienter relinquish any right to use these maxims for any purpose other than personal use without expressed written consent etc., etc. In other words, folks, if you need a lawyer, get a lawyer. If you need a law degree - get a law degree. Of course, if you happen to be a lawyer, here is your chance to breathe some life into your Latin. If instead of legal maxims you need more general Latin expressions, I have special pages dedicated to mottos, sayings, quotes, slogans etc.

A mensa et thoro - From bed and board.

A vinculo matrimonii - From the bond of matrimony.

Ab extra - From outside.

Ab initio - From the beginning.

Accessorium non ducit sed sequitur suum principale - An accessory does not draw, but follows its principal.

Accessorius sequitur - One who is an accessory to the crime cannot be guilty of a more serious crime than the principal offender.

Actio non datur non damnificato - An action is not given to one who is not injured.

Actori incumbit onus probandi - The burden of proof lies on the plaintiff.

Actus nemini facit injuriam - The act of the law does no one wrong.

Actus non facit reum nisi mens sit rea - The act does not make one guilty unless there be a criminal intent.

Ad hoc - For this purpose.

Ad perpetuam rei memoriam - For a perpetual memorial of the matter.

Aedificare in tuo proprio solo non licet quod alteri noceat - It is not lawful to build on one's own land what may be injurious to another.

Alibi - At another place, elsewhere.

Aliunde - From elsewhere, or, from a different source

Allegans contraria non est audiendus - One making contradictory statements is not to be heard.

Allegans suam turpitudinem non est audiendus - One alleging his own infamy is not to be heard.

Allegatio contra factum non est admittenda - An allegation contrary to a deed is not to be heard.

Ambiguitas contra stipulatorem est - An ambiguity is most strongly construed against the party using it.

Amicus curiae - A friend of the Court.

Angliae jura in omni casu libertati dant favorem - The laws of England are favorable in every case to liberty.

Animo furandi - With an intention of stealing.

Animo testandi - With an intention of making a will.

Annus luctus - The year of mourning.

Arbitrium est judicium - An award is a judgment.

Argumentum ab auctoritate fortissimum est in lege - An argument drawn from authority is the strongest in law.

Argumentum ab impossibilii plurimum valet in lege - An argument from impossibility is very strong in law.

Argumentum ad hominem - An argument directed a the person.

Argumentum ad ignoratiam - An argument based upon ignorance (i.e. of one's adversary).

Arma in armatos sumere jura sinunt - The laws permit the taking up of arms against the armed.

Assignatus utitur jure auctoris - An assignee is clothed with rights of his assignor.

Audi alteram partem - Hear the other side.